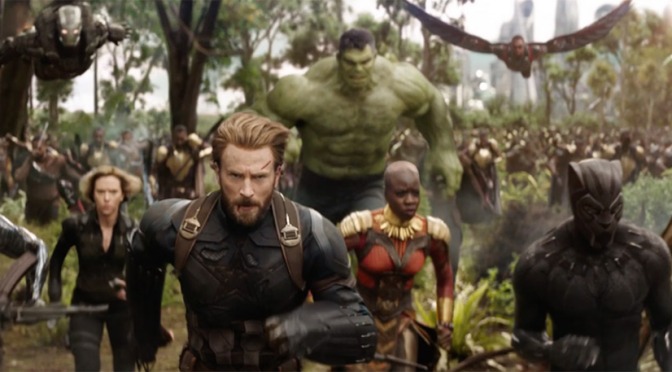 I was one of the lucky ones that got to watch Avengers: Infinity War opening night. For those of you that have not watched this film yet, I wouldn’t continue reading.

This film was 10 years in the making, and Marvel did it right. They took their time, went in with a plan, spent a decade building up characters we’ve now come to love. They clearly show no signs of stoping. This is where DC’s Cinematic Universe ultimately fails, when you rush things you end up with Batman v Superman. When you half ass things, you end up with Justice League. When you do it right however, you end up with Infinity War, and thank God for that.

Thanos has finally come. And he did not disappoint. For years, Marvel has been plagued with underwhelming villains, and while Hela from Thor: Ragnarok was good, Thanos was a compelling villain. After all, every good villain believes they’re the hero of their story, and thats exactly what Thanos believed. According to him, he was bringing peace to the galaxy by wiping out half the population. In a galaxy that’s too overpopulated and crowded some people had to go. And go they did.

People That Had To Bite The Dust

This film was ultimately one huge war, and because of that there were some casualties. Right off the bat, it looked like all of Asgard died. With their home being destroyed and Thanos presumably killing everyone on the ship, Asgard may be no more. The only thing that confused me was that Thor said in the film Thanos killed half of his people. Does this mean there was another ship? Is Valkyrie still alive?

Loki finally met his end. And I think this one’s going to stick. Tom Hiddleston was legendary as the trickster god Loki, but I think it was time for him to say goodbye to the franchise, no matter how loved he is.

Idris Elba’s Heimdall unfortunately met a swift end after saving The Hulk and transporting him back to Earth. This made me sad and really put a wrench in my theory of him possessing the Soul Stone.

Gamora is given an emotional send off as her father Thanos must sacrifice her to receive the Soul Stone from the Red Skull as she’s the only thing he truly loves. I’ve never been a fan of Gamora’s, but her character gave for some pretty emotional send offs with her goodbye to her sister, with Thanos and, of course, to Quill.

Speaking of sad, Wanda and Vision. We all knew this was a doomed relationship the moment the Infinity Stone was placed in his head. I said Thanos would rip it out, and he did. Vision was a character whose powers never got fully explored in the Marvel films, and I think that’s purely because he was too powerful. So have him sick and dying throughout this film was a smart choice, but it was incredibly sad to watch Wanda have to kill him, only for him to come back and be killed by Thanos all over again.

However, I don’t think it’s permanent. I think this was all apart of Doctor Stranges’ plan, as he simply said before disappearing that this was the only way. He looked at all possible timelines and only saw one where they won. Perhaps it was at great cost.

Who did Nick Fury call? To be honest, I had no idea. At first, I thought it may have been Hawk-Eye as he wasn’t in the film at all, but the internet sure showed me. It’s rumoured to be Captain Marvel, Marvel’s first solo female hero that will be introduced. Guess we’ll just have to wait and see won’t we?

All in all this film was amazing! They did a great job fitting everyone in with such a short amount of time (this movie was approximately 2 and a half hours long). Some characters stood out more than others, but it made sense with the story. And while we saw some sad deaths, I still think Cap and / or Iron Man will bite the dust by the end of the second film.

What I really enjoyed was how they managed to make each character stand out. The Guardians felt fun and adorable, Thor (while dealing with some serious death in his life) held onto some aspects of the comedy from Ragnarok, Doctor Strange was stoic, Iron Man and Spider-Man had great banter discussing pop culture and Wakanda was perfect. I mean, Black Panther was the best Marvel film, in my opinion, after all.

I especially loved that the heroes were all spread out and separated from their normal crew. It made interactions more exciting and made the universe feel truly connected.

Have you seen Infinity War yet? Who was the saddest death? Did you find Thanos as captivating as me?